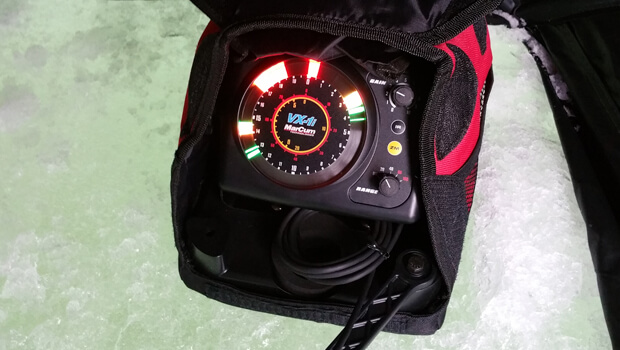 Summary: For years the Marcum VX-1i was the leading entry level ice fishing flasher sold in the United States. It is no longer very easy to find.

For years the Marcum VX-1i was the leading entry level ice fishing flasher sold in the United States. That’s because the Marcum VX-1i never sold for an exorbitant price even though it was incredibly modern and functional on the ice.

The Marcum VX-1i is a nice hand held unit packed in a red canvas case. It has a handle on the back that makes it easy to pick up and carry anywhere on the ice.

I first picked up a VX-1i on sale at a mom and pop ice fishing shop that was going out of business. I got about 50 dollars off the suggested retail price which was enough for me to make the buy. Before that I was using an old Vexlar Flasher.

Effective and easy to use

The VX-1i was easy to use right out of the box. I just charged it for a few hours with the included plug and it was ready to go. The unit itself was great. It was modern and clean with a nice clear circular display. You could zoom in and cover the bottom of the water easily.

You could also easily find changes in depth and structure and watch both your jig and the fish you were trying to catch. I had tons of fun watching big crappie come up in the water column to smash my lure. There is something very exciting about seeing a fish come for your bait before you ever feel the bite. Surprisingly, it is even exciting when they turn away at the very last moment and refuse to bite! Then you start to wonder how many times that happened before you owned an ice fishing flasher without you ever even knowing about it!

I don’t have any insider information on the ice fishing industry or what goes on behind the scenes at Marcum. I am basically a trial and error kind of guy. One of the reasons I made this site was the post the results of my trials so other people wouldn’t have to make as many errors!

That said, it seems to me that the newer Marcum M1 serves as a replacement for the older Marcum VX-1i. Anyone who has read my review of the Marcum M1 will notice that it is almost identical to the VX-1i. The biggest difference is that a different model number is printed on the face of the device. Other than that, the two flashers are almost entirely the same.

That’s a good thing, because it is getting more and more difficult to find the Marcum VX-1i anywhere. That’s no cause for alarm though because you can find the M1 at any number of outlets and it isn’t any more expensive than the VX-1i was. In fact, the last time I checked the price on the M1 it was actually less than what I paid for the VX-1i when I bought my unit years ago.

If you do find a Marcum VX-1i on sale or clearance somewhere for a good price, I would say you should snap it up. It’s not like a loaf of bread that expires. Mine was still in tip top shape when I sold it, and that was after several years of use.

On the other hand, if you can find an M1 for the same price or less than a VX-1i that would probably be the better option. They two units share all the same options but the VX-1i seems to have been discontinued. The M1 is still being manufactured and sold, so it would probably be easier to get it serviced if you had a problem.

The Marcum VX-1i is sold out from most retailers, but the Marcum M1 serves as a suitable replacement. 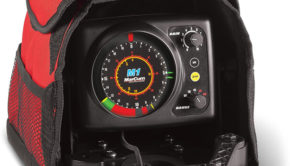 Review of the Marcum M1 Flasher →

2 Responses to Review of the Marcum VX-1i Flasher