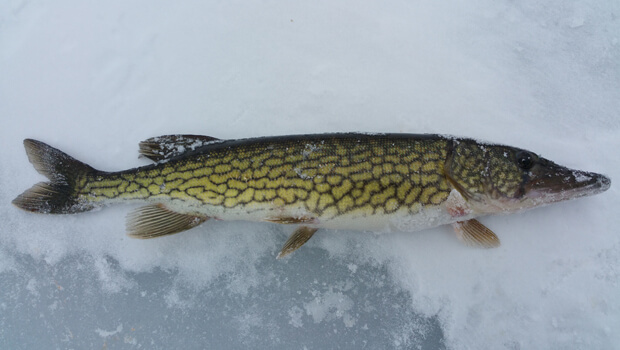 Chain and grass pickerel are smaller members of the ice family. They feed all year round and are eager biters when lakes are frozen. A lot of pickerel are small but it’s not uncommon to catch them over inches either, depending on where you are fishing.

Small pickerel are often derided as “hammer handles” by people who ice fish. Some people call them bait stealers. Others say they aren’t good eating. So there are a lot of folks out there who dislike these aggressive predators. But in fact pickerel are fun to catch and yes you can definitely eat them.

Pickerel are so disliked by some people that it might be more popular to write about keeping them off your hook. But to tell you the truth, I go ice fishing to catch fish. Most times I am targeting species like panfish and trout. But I don’t mind catching other fish either. There have been days when the bite was slow to non existent for hours at a time. Then a flag would fly on a tip up and I’d bring in a chain pickerel. I wouldn’t say the fish saved the day, but they did make my time on the ice more enjoyable.

The easiest way to catch pickerel is just to put some small live bait like a fathead minnow on a tip up. Hook the minnow in its upper back with a treble hook. Pickerel have bony mouths like pike. You’ll want to set the tip ups near the edges of weed beds if the grass under the ice is still relatively green. Once the grass starts to die off that doesn’t work so well. So then you can set on the edges of basins and other areas where predators can ambush their prey. 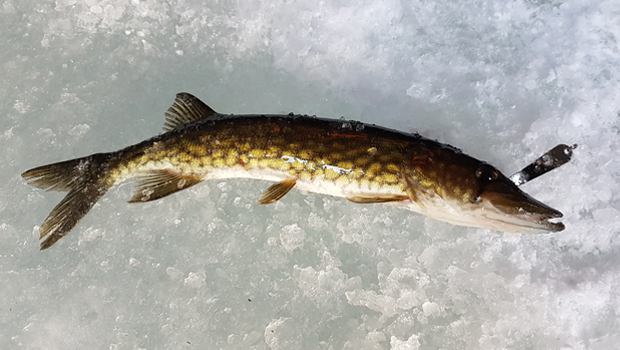 Fishing with stand up gear can work too, and it is a lot more fun. You want to target the same sorts of areas generally speaking. But you can also go out in a big open basin and fish. If you work a shiny spoon under the ice you can bring in the pickerel from further away. They are aggressive predators and they will hunt down a meal.

Any good vertical spoon will work on pickerel. I particularly like the VMC Tumbler Spoon. The shiner color that is silver and black with just a bit of red works well on pickerel but also other fish like trout and big pike. So it can bring in a lot of action and you never know when you might hook into a big one. This color is also a great general pattern that works in various situations and lakes. It looks like a bleeding minnow after all. The fire tiger patterns are always good too.

What to do with pickerel

Pickerel are toothy critters, so be careful when you are unhooking them. You can actually get them in on pretty light line, especially with a vertical spoon. That’s because they will mostly get hung up on the hooks, and the longer spoon keeps their teeth clear of your line.

Once you get the hook out though, you may wonder what to do with them. Some people think that pickerel a nuisance fish. I am not one of them. I absolutely do not support the guys who leave them on the ice to die then walk away. There’s no call for that. I appreciate this native species for what it is. So I usually just turn them loose. Pickerels are tough and they can swim away easily after a fair battle on hook and line.

But you can also keep them to eat. This seems more popular in some places than others. Up north where people eat a lot of pike it is also common to see people keeping pickerel. They are a bony fish, but they don’t taste bad at all. In fact they have a light meat and very little in the way of a fishy smell.

The most common ways to prepare pickerel might be to grind them up whole to make fish patties or just pickle them. When you pickle a pickerel the right way, the bones actually dissolve. So then you don’t have anything to worry about when you eat them.

Another way is to prepare pickerel is just to approach them like any other fish. Remove the skin then filet them. Lay the fillets skin-side down on an oven tray and season to taste. Bake or broil the fish then simply pull the meat away from the large Y shaped bones as you eat. Sure you can’t scarf the fillets down whole this way, but the fish tastes good and you can actually take your time and enjoy a meal. After catching a mess of pickerels and preparing them for the table, you deserve it. 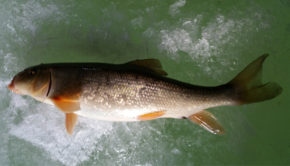