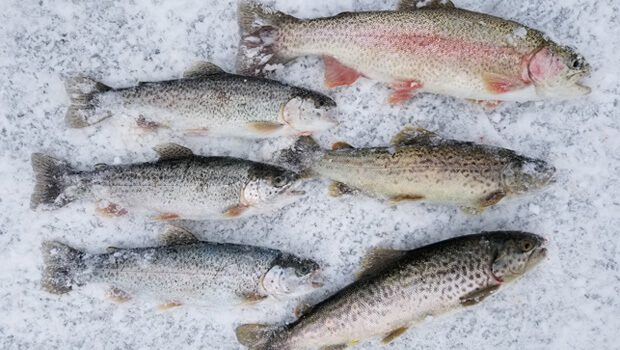 The most popular fish to catch through the ice are probably species like perch and crappie. Walleye, bass, and even catfish have their followers too. In some places though, the most obvious target for ice fishing can be stocked trout. In states like Pennsylvania, stocked trout can be among the largest and most prolific species of fish in a given pond of lake.

While stocked trout are hardly the most difficult species of fish to catch in any body of water, certain presentations and fishing styles are undoubtedly more effective than others. An exaggerated example would be using a large treble hook tipped with a six inch sucker on a tip up. Sure a trout might get hooked on that setup but it isn’t all that likely.

Different species of stocked trout react and even feed differently, but being raised in a fish hatchery seems to impart at least some kind of uniformity into all stocked trout. That’s obvious with certain baits such at the Berkley Trout Worm that will catch all species of trout in all kinds of conditions. 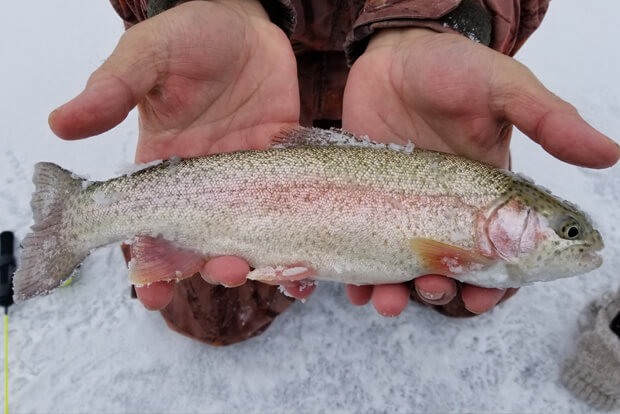 Probably the easiest way to catch hatchery trout under the ice is to fish Powerbait Trout Bait paste on a stationary line. There are many ways to do that but I normally follow a basic procedure. I spool an ice fishing rod and reel up with four pound test ice fishing line. Then I tie a size 12 gold salmon egg hook on the end of the line. A few feet up from the hook, I pinch one or two Water Gremlin split shot onto the line. Then I cover the hook with just enough Powerbait to cover the hook. Then I lower the rig down into the water and either put the rod into a HT wire rod holder or a Clam Artic Warrior. Of course I have to set the drag lightly so that a passing trout doesn’t pull my rod and reel into the lake. Trust me, that can happen!

After setting up a pole with Powerbait as described above, there isn’t much to do but wait. Takes can be fast and furious or they can be as light as any cold weather panfish hit. Once I reeled in a rod at the end of the day only to find that there was a trout attached to the hook! There was no indication that the bait ever even moved until I felt the weight of the fish.

Powerbait doesn’t fish well on a tip up. Since it floats, it has a habit to pop up and wrap around the tip up line which basically puts the entire rig out of commission. Tip ups can definitely catch trout but they are better with either a small live shiner or two wax worms on a size 10 glow in the dark treble hook.

All species of trout are cold water fish and they tend to be quite active under the ice. On the one hand, that means that they don’t show up as stationary blips on flashers as a lot of other species like crappie tend to do. On the other hand, this presents the opportunity to fish lures like jigs and spoons through the ice quite aggressively rather than just kicking back and waiting for fish to attach themselves to a treble hook.


Rather than looking for trout on a flasher you can use your flasher to find likely holding areas and transit points for trout. Often times I find that means locating a channel or a deep spot in a lake. Springs and inlets can also attract trout but you have to be very careful as those are also spots where the ice is normally thin or even nonexistent.

Once you get set up in a likely spot you can try some of the best lures for stocked trout. In my experience those include spoons like the Slender Spoon, the Tumbler Spoon and the Little Cleo, as well as ice fishing jigs including the Marmooska in colors like fluorescent red, orange, and pink. Gold tungsten jigs like the Clam Drop Jig tipped with wax worms also work well.

Fishing regulations vary from one place to another. When the rules allow I usually put out a tip up or two rigged with maggots or wax worms along with one or two rods rigged with Powerbait paste as explained above. With my jigging pole, I work various holes with a variety of lures until I find what works.

It is best to use a wide variety of approaches until you figure out what is going to work. The answer can change from one day to the next. Some days Yellow Cheese Powerbait will catch a limit in fish in no time while a spoon like the Tumbler will take a creel’s worth the next. 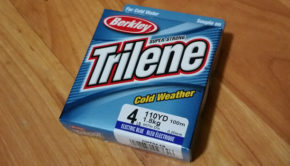 The best lines for ice fishing →

How to catch panfish through the ice on very cold days →