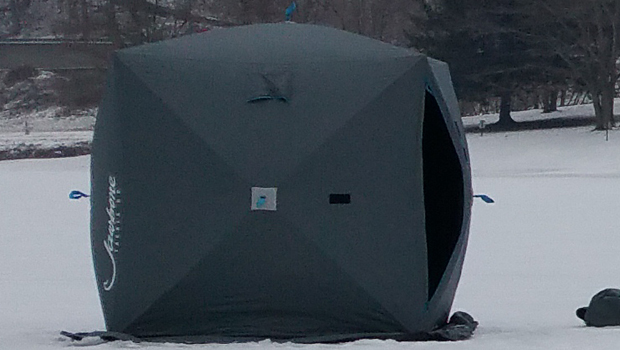 Summary: This product seems to be a no name version of better ice shelters released by other companies. It is poor quality.

Give It A Miss

The Jawbone Shield Hub Shelter is an economy class ice fishing shelter from a company that I have never heard of before. I found the shelter on sale at a local store one season at a price that was too good to pass up. As it turns up I probably should have done like Dionne Warwick and did a walk on by.

I can’t be sure, but if I had to guess I would say the Jawbone Shield is probably one of the many generic products coming out of factories in Asia that is loosely based on better known products made by brands with trustworthy names. It seems a lot of companies are now releasing products similar to best sellers at better prices and trying to gain a share of the market.

Since most things are now made in Asia it is easy for the factories to do this. Even some of the better fishing companies are putting out junk products under their names, so it doesn’t always even matter in terms of quality. In some cases I have even found “no name” products that worked better than those released by famous companies. Unfortunately, this is not one of those cases.

On first glance, the Jawbone Shield Hub looks like most other portable one or two man shelters, but after you put the thing to use you start to realize that it can’t stand up to the competition. The windows are small and in odd positions. The zippers on the door flap stick. The bag is so small that it is tough to get the shelter back into its holder after a long day on the ice with cold hands. And that’s if you can even take it apart at all. 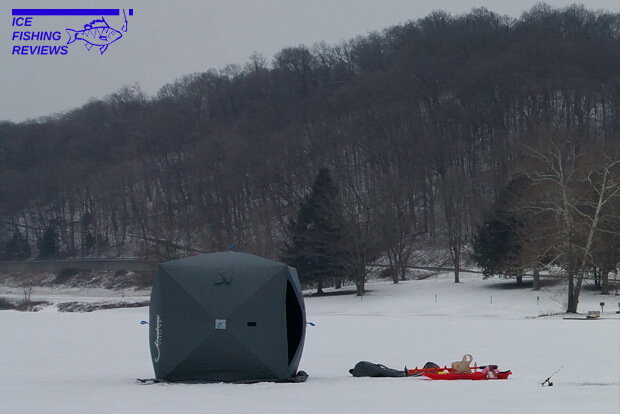 In my case I couldn’t. On the third time I took the shelter down, one of poles suddenly snapped like an ice sickle making a loud “crack” sound that echoed all around the lake. Now, you might blame me for being a heavy handed oaf and you might be right. But I have used at least five different portable ice fishing hubs over the years and I have not broken any of them except for this. That ought to say something.

You could get away with using the Jawbone for sure. It holds up to the wind when you peg it down. It’s as good as any other uninsulated shelter in that regard. You could probably live with the small window and maybe even the sticky zipper. But you will be mighty upset if the tent pole snaps when you’re out on the ice and maybe even far from home. Part of a trip or even a whole season could be ruined if you don’t have the money or opportunity to buy another shelter in time.

The Jawbone Shield is inexpensive for a portable ice shelter. When it is on sale, it is even less expensive. In my view, it is still not a good buy. For just a little more money you can get a much better ice shelter like the Eskimo Quickfish that is more likely to stand up to several seasons of use.

The Jawbone Shield Hub Shelter is available at Field and Stream. 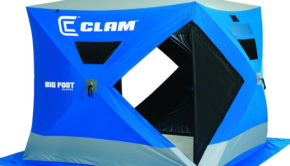