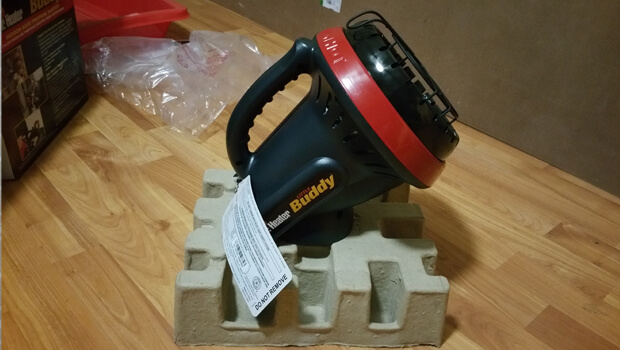 Summary: The Little Buddy is a great compact and light heater than can make things a lot more comfortable and extend your time on the ice.

The Mr Heater Little Buddy is an inexpensive but very good portable heater. It is very compact and light and can be carried practically everywhere. It runs on small one pound propane tanks that can be purchased at any camping supply store or Wal Mart.

The Mr Heater Little Buddy is labeled “indoor safe” which means it can be used in an ice fishing shelter with no problem.

The top unit screws right onto your propane tank. Then you just press the red fire button to light the heater. The heating element turns red and starts kicking out warmth. You can adjust the level of the heat with the knob. It’s that simple. When you’re done you just turn the thing all the way down and it shuts off. You can even save the propane for future uses if there is any left.

The Little Buddy produces a little odor when you first fire it up but it’s not bad all. It smells similar to starting up a propane grill. That’s it as far as that goes. 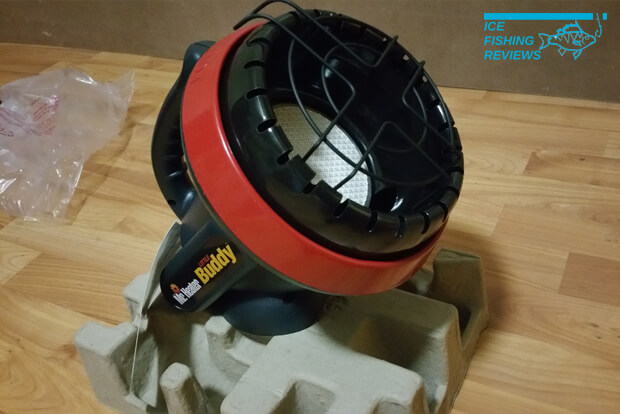 The unit has a wire grate over the front of the heating element too, so you don’t have to worry about bumping into it and burning yourself or, worse still, running your fishing line in front of it and burning it off.

Mr Heater claims the Little Buddy can produce heat for five and a half hours with one propane can. I think it depends on the climate but I have actually used a single can for more time that that. In extreme cold however I probably got more like four hours, though that was probably because I had the heat level turned up near the maximum.

With the Little Buddy there is not much to complain about. It does what it says and it doesn’t cost an arm and a leg. The propane tanks don’t cost too much either. You can heat your way through an entire ice fishing season or two without spending a ton of money.

The only bad thing I have to say about the Little Buddy is that it is a little too easy to lose the black plastic ring that holds the heater up. This ring is put around the propane tank and it balances out the unit. Unfortunately, when you change tanks or transport the heater you can misplace the ring. Then you’re sort of out of luck. The heater won’t stand up without the ring unless you bury it in some snow or ice. If you do that, the whole unit gets stuck in the ice when the propane tank gets cold. On the other hand, if you try to operate the heater with the unit leaning to one side it shuts off. The safety mechanism doesn’t let the thing produce heat if its not standing straight up.

This isn’t to say the Little Buddy is bad. I am just saying that if you buy one, make sure to keep an eye on the plastic ring!

The Mr Heater Little Buddy is available at Amazon.

How much ice is safe ice? → 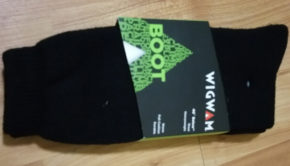 Review of the Wigwam 40 Below Heavyweight Boot Socks → 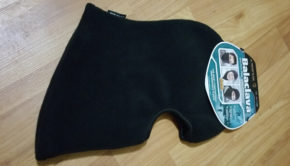 2 Responses to Review of the Mr Heater Little Buddy